This Week’s Trends in Education and Technology (October 24-31)

[The Week in Education and Technology is a weekly summary of news, events, and ideas related to education.]

In 50 years, what we know as our internet will be largely obsolete. Rather than organizing information in the form of URLs, apps and websites, our digital interactions will be conversational, haptic and embedded in the world we live in (even, to some extent, in ourselves). As a result, the distinction between the physical and digital worlds will largely fall away.

Things That Caught My Attention

Results from the latest National Assessment of Educational Progress show little overall change in U.S. student performance, with the exception of 8th-grade reading, where the average score dropped by four points. The reading skills of today’s 8th graders are comparable to their counterparts of 10-20 years ago. Perhaps more alarming to some is the lack of significant improvement over the past 10 years, in spite of reform and funding efforts.

So, maybe it’s time to look outside of traditional education for remodeling ideas? Public libraries, anyone?

[C]ompare the overall pace of successful reform of the nation’s multi-tiered educational system with that of the nation’s libraries where practitioners (i.e., librarians) are the ones who decide where they want to go and live with those choices.

As mentioned, education is an extremely complex affair requiring more than just skilled classroom teachers to succeed. But if the history of libraries is any guide, perhaps the next round of reform efforts (especially those initiated by people with limited experience inside a school building) should involve getting out of educators’ way, rather than telling them what to do next.

Before we start feeling isolated in our struggles with student performance, education design, school choice, equitable access, etc., take note that others have their own challenges. For example, Britain is confronting the disparities between public schools and its famous but elitist private schools, such as Eaton College.

National Student Clearinghouse Research Center has released its 2019 report on the nearly one million “Some College No Degree” students who returned to their studies to earn a credential in the past five years. One significant finding from the report is that “Ten percent of this population are “potential completers” who have already made at least two years’ worth of academic progress up until their last enrollment. Potential completers were found more likely than other former students to re-enroll and finish college.”

Meanwhile, the scramble for survival by some small liberal arts institutions continues to make headlines. One example is Hiram College, which is slashing tuition and infused its traditional liberal arts curriculum with more technology and science to woo students. On the other end of the spectrum, we have Cincinnati Christian University, which announced it will close at the end of the semester.

Since 2015, the university has made a series of bold bets to try to reverse declining enrollment and tuition revenues. Those moves were among the reasons cited by its accreditor, the Higher Learning Commission, when it issued its dire warning in the summer.

With little planning, the university started a football program, laid off administrative staff and faculty members to cut costs, and revised its academic mission. But its retention and graduation rates suffered, the accreditor reported, while its fiscal condition continued to erode.

Of course, a big factor in the survival of such institutions is their ability to retain accreditation, and this week, the Department of Education released its updated guidelines for accreditation and state authorization of institutions.

EdSurge has a nice article on OpenStax and how one university professor (with support from his university, started a project that would upend the textbook publishing industry.

Also, if you’re interested in the OPM market, I highly recommend you check out this WCET webinar featuring Phil Hill and his research.

Speaking of Phil Hill, he was also trending this week for his analysis of Canvas’s latest earnings call.

ITHAKA S+R has a new study out — Setting a North Star — Motivations, Implications, and Approaches to State Postsecondary Attainment Goals. Among other things, the report discusses individual state attainment goals vs. their actual level of attainment. I find this chart from the report particularly revealing when it comes to taking a realistic view of education attainment and workforce challenges. 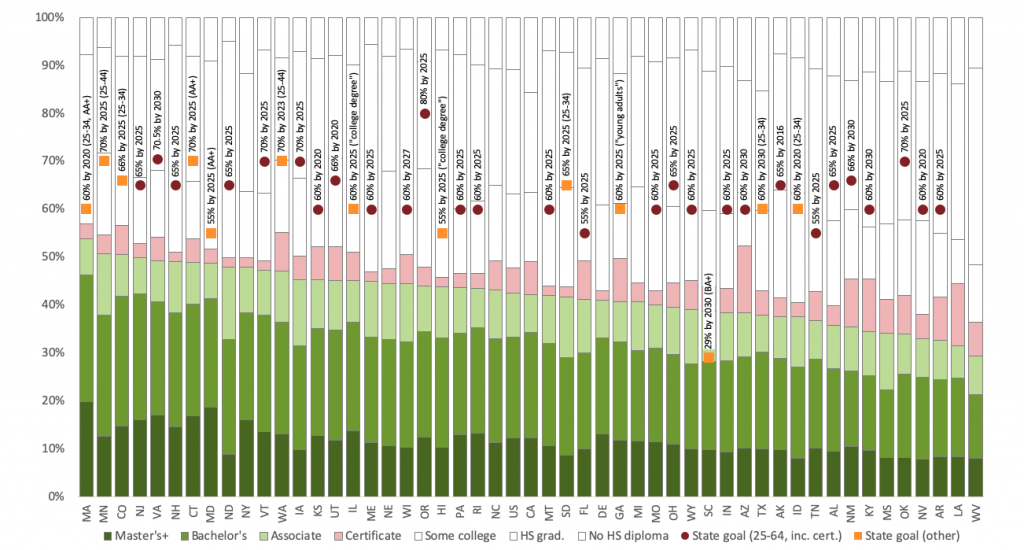 As m wife and I move toward hybrid and electric vehicles (our next cars), it’s heartening to see new battery research out of Penn State.

Forget the 10 hours it can take to charge your Tesla Model X. A new battery, created by researchers at Penn State, can complete a charge in as little as 10 minutes. The new lithium-ion battery could top up electric vehicles with 200 miles of charge in a time comparable to filling up a gas-powered vehicle. The technique involves quickly heating the batteries up to 140 degrees Fahrenheit and cooling them back down to room temperature during the charge cycle.

And, according to experts in a variety of fields, there is actually plenty more to be optimistic about in the next 50 years of digital life.

One reason for excitement is definitely the opportunity for space travel and exploration. If SpaceX has its way, we’ll be sending humans back to the moon by 2024.

Research Articles and Posts for the Week

TEL Library Posts You May Have Missed

The Man With Two Sons (Parables on Learning)

Our Schools Have Lost Focus on the Lowest-Performers

Overall Education Spending Is Up, but It’s Not Going Toward Instruction

What Can Schools Learn from the Successful Transformation of Public Libraries?

Cincinnati Christian U. Will Shut Its Doors

The rise of immersive learning

How a University Took on the Textbook Industry

Experts Optimistic About the Next 50 Years of Digital Life

New Battery Could Charge an Electric Car in 10 Minutes

Why Quantum Computers Will Be Super Awesome, Someday

SpaceX wants to land Starship on the Moon before 2022, then do cargo runs for 2024 human landing

This Week’s Trends in Education and Technology (February 21-27)

This Week’s Trends in Education and Technology (February 14-20)

This Week’s Trends in Education and Technology (February 7-13)